﻿In addition to the bars, go go bars, freelancers and massage parlours, there once was one further option for the paid variety of entertainment, and that is in houses of ill repute, otherwise known as Brothels. In recent times the Thai authorities have clamped down on these establishments and if there is any activity today, it remains pretty well hidden. So well-hidden that it is probably not worth your time trying to look for it.

These brothels did not officially exist, although most Thai's were well aware of them as these establishments were primarily for Thai's to make use of. They typically had girls from Laos, and sometimes Vietnam waiting for men to walk in and choose them, and it is worth noting that the Vietnamese girls are a little scared or intimidated by western men as they have a strong belief that all western men are bigger than their Vietnamese counterparts when it comes to the trouser snake.

The buildings inside were as basic as they come, with a bench or series of seats with girls dressed in bikini's sitting and waiting, more often than not playing with their mobile phones. You walked in and chose a girl, negotiated a price and were are led of to a room in the back. The rooms were also as basic as they come and will typically have a mat on the floor but not much else, then again what more do you need?

The price asked was generally around 600 baht, which is much lower than the girly bars, and priced for the local Thai men, although the men running the operation were more than happy to see western visitors as your money is just as good. Many of the girls that worked in these places were illegal immigrants, and rarely left the premises, so there was almost no chance for you to take one back to your hotel for the night. These girls were here for 'short time' boom boom, and to make as much money as possible, without taking time out to wonder off somewhere with a man.﻿

The brothels were located on Soi 2 and Soi 3 off Adunyadet Road, and were normally more 'open' about what was going on behind the doors. You would just have walk around late at night and look for an open door and/or a light above an open door. Take a look inside, and in most cases where there is an open door, you would find the girls. There were some places on both these Soi's that are a little more discreet but there are normally some Thai men loitering around the entrance, and if they saw a lost looking visitor, may well have talked to you and offer girls.

Soi 7, (again off the Adunyadet Road), used to be more active but it appears that many of the Laos girls have been sent home but there may still be some people that try to operate here but it is not as obvious as it once was. Sometimes the best and only option is to ask a tuk tuk driver, who will happily take you where you want to be, and someone, somehow will get some girls for you to choose from. This really is a case of where there is a will, the Thai's will find a way.

If you are wondering if there was some exploitation going on here, then the answer can only be an emphatic yes, and I would guess the girls would see perhaps 50% of the money handed over to the Papasan. Oh yes, most of these places were run by men, and there will be others you cannot see, so it was wise to not make any problems here or you will be quickly surrounded by a good number of upset Thai's looking to 'sort you out' and remove you from the area. 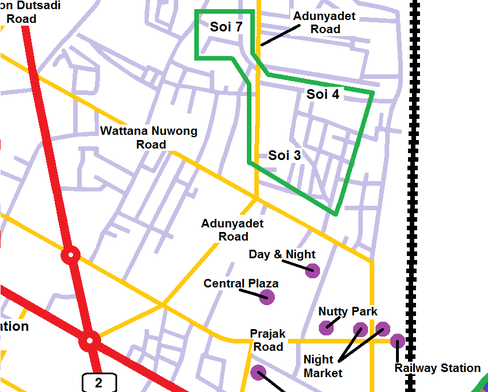