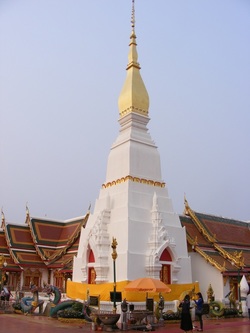 Wat Phra That Choeng Chum Worrawiharn, Sakon Nakhon
I am frequently asked if Sakhon Nakhon has much to offer visitors and until recently I have always suggested that there is very little of interest but following a recent tour of temples in east Issan, I must simply add a temple that has to be considered as an attraction.

Phra That Choeng Chum is a major and sacred religious monument on the eastern side of Sakhon Nakhon in the grounds of Phra That Choeng Chum temple. The structure is rectangular and made with mortar and bricks reaching a height of 24 meters. If you look carefully at a ten-satang coin, you will see it featured on the reverse side.

Sakhon Nakhon was a major city in the Khmer Empire of Khotraboon, and  its glory days were between the 12th and 16th centuries. Today the city of Sakhon Nakhon does not hold much for the tourist but Wat Phra That Choeng Chum Worrawiharn is well worth inspection.

Close to the vast Nong Han Lake in Sakhon Nakhon, Wat Phra That Choeng Chum was originally a 10th century Khmer monastery. Today the temple is highly revered as it is believed that the four incarnations of the Buddha came to this location and pressed their footprint in the soil here. The chedi was built to cover the footprints of the four Buddha's.

The temple derives its name from the Phra That Choeng Chum Chedi and is an important pilgrimage site for Thai Buddhists plus a magnet for the local population. In addition to the Chedi are several other attractive buildings, including a wooden temple that is under construction at the time of writing (27 March 2016) which sits inside an octagonal pond.

There are the standard Naga snakes, temple guardians in the form of Chinese style lions, gold leaf decoration everywhere and a couple of attractive floral arrangements that utilise some traditional Thai carts. The majority of what is on view is inside a reasonably large compound which is kept very neat and tidy, but there is more to see outside the main compound where there is a car park and market.

When we arrived, we were treated to a traditional Thai dance by 75 ladies, presumably from Sakhon Nakhon. It looked as though it was a rehearsal for a later festival as they were dressed very casually. Once they had finished their dance they were incredibly friendly and inquisitive about this ferang that was wondering around the compound which I found a little surprising but pleasing at the same time. Seeing a ferang is especially rare in this part of Issan as a number of ex-pats have settled down here with their Thai lady.​

Because the temple grounds are particularly impressive it can be quite easy to forget that there are further sights inside some of the buildings. While there is nothing exceptional about the interiors they are worth a look.​

How to get to Wat Phra That Choeng Chum 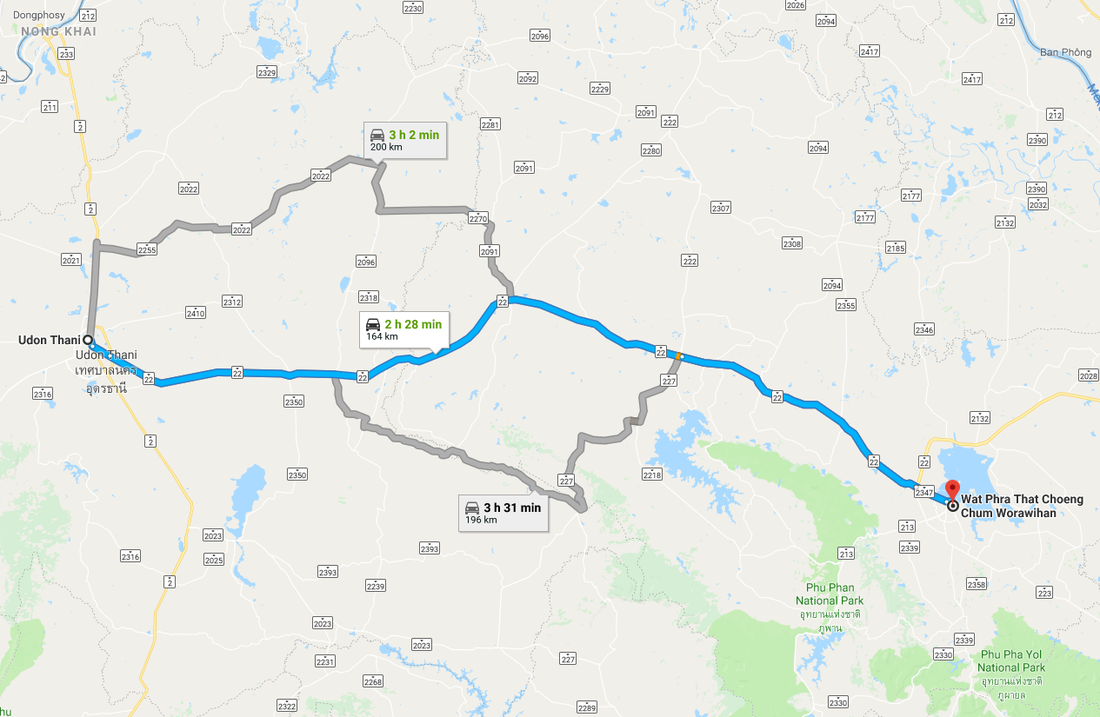 From Udon Thani, follow the ring road to the east of the city then turn left on to route 22 (near the Big C Supermarket). Follow this road all the way to Sakhon Nakhon (160km).

​At the intersection at Sakhon Nakhon Rajaphat University, go straight over, leaving route 22. Keep driving past the airport on your left until you arrive at a sharp right bend. Follow the road to the right (Rat Phatthana Road) and take the 2nd left turn on to Charoen Mueang. The temple grounds are then on your left about 1km further down this road.