When we first arrived I began to think we have come to the wrong location as the temple grounds was void of any noteworthy features, but once out of the car and had walked a few paces, a huge green Naga Snake appeared, along with a number of other interesting structures.

Wat Pho Chai​ is not a temple that is going to appeal to many visitors, other than Thai's and other Buddhists, unless you have a deep fascination for Thai Buddhist temples, but it is a nice temple to visit if you want to gain a few points with your lady.
While the large gold Naga snake and the huge green Naga snakes are, it is what is hidden inside the green Naga that makes this temple a little different to anything I have seen to date. On either side of the green Naga snake you will see a doorway. If you approach from the left, having taken your shoes off, walk round the front of the Naga and enter through the door at the other end. The entrance is not very high, perhaps just 5 feet, so be prepared to bend down a fair way to gain access. This doorway leads to a narrow tunnel cum passageway which is packed with Buddha statues, flowers etc. The floor is a mixture of manufactured tiles and stone, with the walls a combination of stone and what looks like stones made from resin.
Away from the Green Naga, there are a number of far less prominent features along promenade on the banks of the Mekong river. While we were there, construction was underway to extend this promenade quite considerably and one to equal that in Nong Khai. if not quite as long.

How to get to Wat Pho Chai - Phon Phisai - Nong Khai 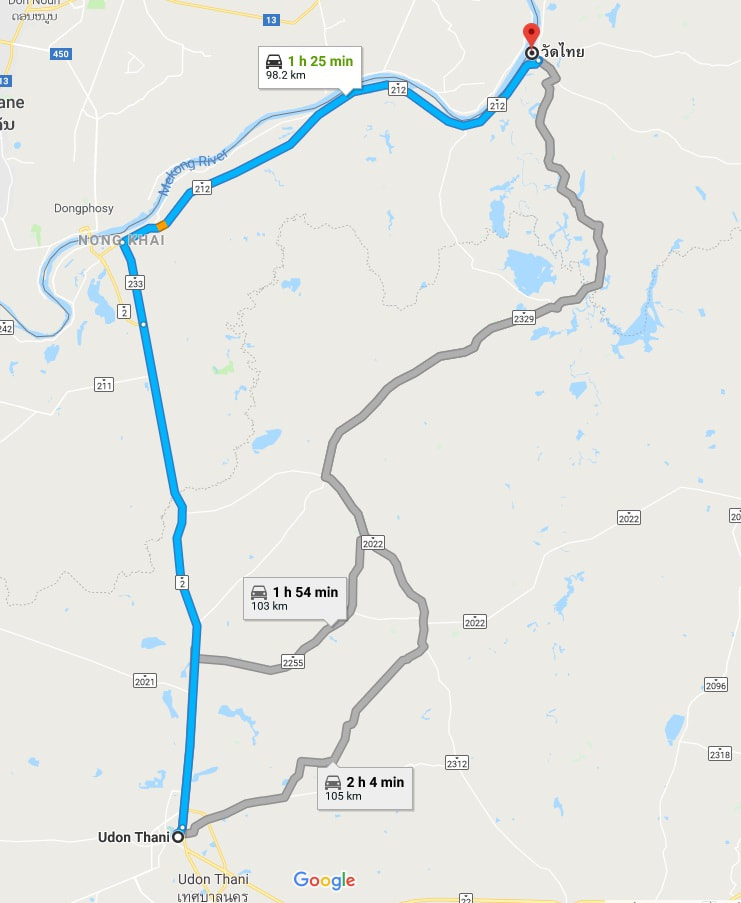 Wat Pho Chai is just under 100 km from Udon Thani and the road is dual carriageway for the entire journey. The only slight delays you may experience will be in Nong Khai where the heavy through traffic bottlenecks and the main junction which is controlled by traffic lights. Unless you go very early in the day, you are unlikely to avoid this traffic. - Journey time is about 1 hour, 30 minutes.