Kham Chanot, or often labelled Kham Chanod, is a Buddhist forest temple near Kham Chanot village in Udon Thani province, in the North Eastern part of Thailand, known as Isaan.

The temple is located in the Wang Nakhin area at a lake where a mythical large snake, the naga lord Sisotho, is supposed to be living. The worship of this naga lord is one of the main features in this small forest monastery. In the region of 10 monks live here as permanent residents. Both local Thai pepole, and some from Laos, believe the naga lord has a hideaway on the island. It is connected to another Wat premises by a bridge, which is guarded by two large nagas (snake like creatures), and the shrine of the Wat is located on the island. The bridge is approximately 100m or so long, which you walk along bare foot, as no shoes are allowed. As you approach the nagas guards, you will see a whole load of shoes scattered around either side of the entrance. There is normally no need to be concerned about your shoes going missing, as this very rarely happens (if ever).

A rural market and small zoo has also been added to the temple complex for visitors to enjoy.
Kham Chanot is about 80km north east of Udon Thani city, and is somewhere most ferang don't get to see unless their Thai wife takes them. Kham Chanot is a highly sacred site in these parts, with a unique cluster of trees (Chanot tree), which by all accounts can only be found at Kham Chanot (so my wife tells me).

The site attracts Thai's from afar at weekends in particular, all coming to pay their respects and hope that the spirits will present them with some good or better fortune.

Many people rub the wide range of gongs that are placed on site, in the hope that their rubbing will create a decent vibration, and if this does happen then good luck has been granted by the spirits. Some of these gongs can make a rather impressive noise if rubbed well.

Depending on who wrote what, there are many different spellings for this place, as there seems to be for everywhere in Thailand. What I have called Kham Chanot, is also typically labelled as Kham Chanod, Kam Chanot, Kham Chanode, Kam Chanode or Kam Chanod, although there may well be other variations out there. If you have a Thai wife or girlfriend, this is definitely a place to bring them to, and you should get lots of thanks in return.
The Thai's will never miss the opportunity to undertake some worship to Buddha and hopefully gains substantial merit in the process, and will take their time to make wishes, asking the spirits to look upon their life favourably and make things better for them. Another thing you are very likely to see is Thai ladies (mostly), who appear to be closely inspecting the bark of the Chanot trees. What they are actually doing is looking for a sign - numbers in fact. If they see what they believe is a couple of number, or perhaps three, they will use these numbers to form the basis of selecting their next batch of Thai Lottery tickets.

I must confess that I never saw any numbers on any of the trees, and I was looking hard, trying to blend in with the local population as best I could.

How to get to Kham Chanot 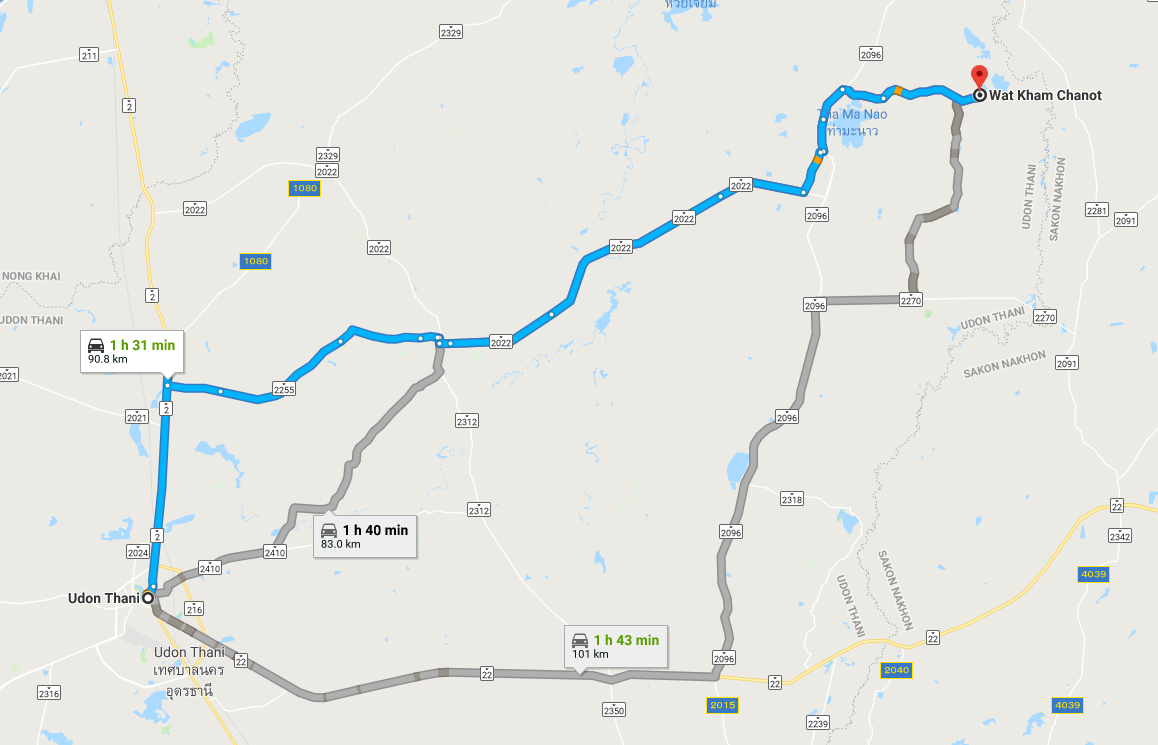