Wat Baan Waeng (also known as Pho Chair Sri) is an absolute gem of an attraction, and one that is constantly being overlooked, perhaps because it is not all that well publicized (until now that is). Wat Baan Waeng is basically heaven and hell on Earth, in the eyes of Thai Buddhism, and has a range of larger than life statues and sculptures in depicted scenes to bear out the the polar extremes.

As you enter the Wat or Temple, what awaits you is far from obvious, and you could easily think you are in the wrong place. To help you be sure you are in the right place, the first image is the first thing you will see on entering the compound. It is a really pretty Wat, although rather small, and perhaps spoilt a little with the flat tin roof that extends from the traditional steep roof sections, and an ugly concrete post in the corner which supports a number of strip lights. Ignoring those two minor blemishes, Wat Bann Waeng is a lovely and deceiving location. It is deceiving because the only other things you can see from the car park is a handful of stalls selling trinkets and spiritual items, and a well, which is reported to have simply appeared (that is, it was never constructed by man). You can look in to the well if you wish, but will not see a great deal as the water level is normally very high. However, if you do want to look inside, take off your shoes before walking on to the surrounding low level plinth area.

If you head to the left of the temple, passing the well, and keep following the pathway to the left, you will see a straight section of path which is lined with Buddha statues, all on plinths. These are beautifully presented, although everything is currently only written in Thai. Even at this point, it is still not obvious as to what the main attraction here actually is. However, after strolling along for another 30m or so, you begin to see colourful statues, hiding behind the trees and shrubs.

The first section depicts what heaven is like for Thai Buddhists, with beautifully manicured gardens, music playing, good food and drink, and generally everything nice and cosy. When you move along for a bit and see the next section, the difference could not be more obvious, and this is hell, for Thai Buddhists. A horrible, uninviting location where people are tortured in a number of somewhat callous ways, such as being forced to drink boiling water, being boiled in water, crucified, having your tongue cut off for lying etc, and generally being put through eternal misery. The 'Hell' section is actually divided in to more than one area, so you need to keep wondering around the compound a little to see everything. While you can get some pleasure from this temple and its grounds on your own, having a Thai who can speak to you will be very beneficial, as is the case in most instances.

Wat Baan Waeng is an attraction we visit often, just for ourselves, and one of the reasons other than it is just so impressive, is that it is still developing. The temple compound has a large area inside its walls, and more statues from both sides of the spectrum are sure to follow over the coming years.

How to get to Wat Baan Waeng 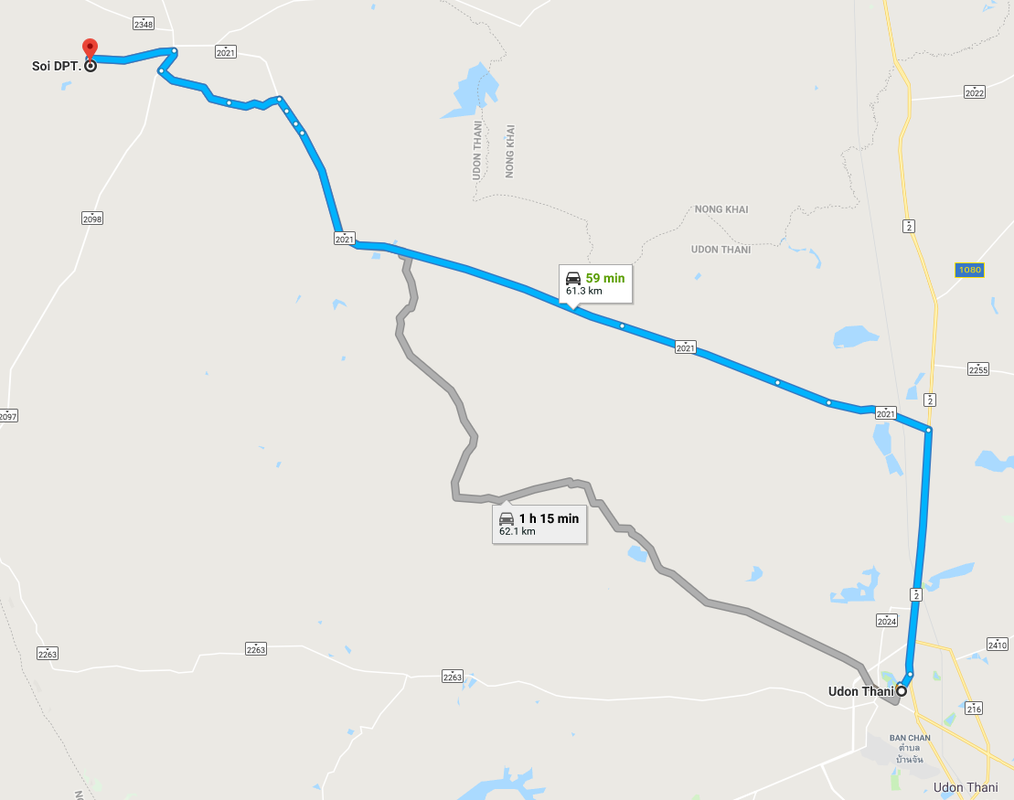 From Udon Thani, head toward Nong Khai on Highway 2, and just a couple of kilometers before the Na Kha Silk Market, turn left on to route 2012 heading for Ban Phue. When you arrive in the town, at the second set of traffic lights (where you can only turn left or right), turn right, and at the next set of lights, turn left. Route 2348). At the next village, take the 3rd left turn, and follow this road all the way to the next village (Baan Waeng). At the 3rd crossroads, turn left, and then next right. You will eventually come to a temple on the left - drive past it, and go round the S-Bend that follows. At the other end of the S-Bend, you will see Wat Baan Waeng.