Than Ngam forest park is in Tambon Nong Saeng, among the forest areas of Khun Huai Kong Si and Khun Huai Sam Thak an, covering an area some 78,125 hectares. Than Ngam was declared as a forest park on the 19th December 1984, and is a mixture of  is deciduous forest, of which the major species are ta baek, pradu, makha mong, daeng, krabok, and chingchan. There is a waterfall, although as with many places in Udon Thani, contains water only at certain times of the year, which is of course in the wet season. When the water levels are high enough to create something tangible, the waterfall is well worth seeing in 'full flow', so to speak. When the pool below has sufficient water, you are permitted to swim to your hearts content.

Other interesting features in the forest park include a cliff, a stone ground, and a beautiful cave. The stone ground, commonly called 'Lae', covers a large area with a scattering of overlapping giant rocks, overlooking a scenic view.

As you enter the site, on the left there is a small lake. If the lake is empty then the chances are that there is no water flowing over the waterfall. On the other side of the coin, if the lake is full then there is a good chance that you will see the falls in full flow. However, most of the pathway to the falls are no more than a dirt track where water also rushes down when it rains. This pathway can be a little tricky to walk when it is wet, so take great care. The path is about 200m and a small section of it is a stone stairway. The steps are quite steep, so once again take a little care when walking down them. Part way down the pathway there is a fork junction where you go to the right to see the waterfall, where you will eventually come to a small bridge. Coming back up the stones steps is a little easier but the slope from the falls to the top of the steps is quite deceiving and a reasonable level of fitness may be required to get from top to bottom without a stop for a bit if a rest.

The Than Ngam Waterfalls and park are still worth a look even when it is dry as there are always insects and snakes to be observed, including some small snakes that hunt for fish in the small pools of water that remain in place under the tree trunk bridge at the bottom of the path.

Opening times 8.00am to 6.00pm. There is a small charge of 40 baht for car parking.
Between the pathway and car park is a series of restaurants and shops of course which is useful if you want a cold drink or snack while you are here.

How to get to Than Ngam Park 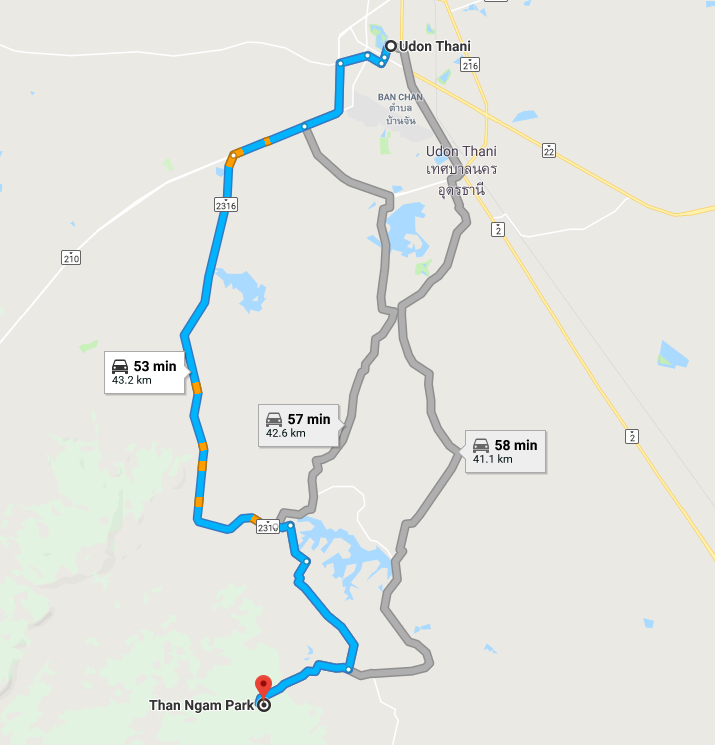 From Udon Thani, take route 210 toward Nong Bua Lam Phu, turning left on to route 2313 about 3km from Udon Thani airport. Follow this road all the way past the Haui Sam Phat lake, and in Nong Saeng village, take the right turn at the sharp left bend. This rural road heads directly to the park.