Suwannakhuha Cave is perhaps a little misleading by it's name, as the site is more spiritual that it is in cave exploration. Nonetheless, it is a very nice attraction to visit and spend a little time. The images below really do not do justice to the site, which was possibly due to the fading light as a storm came to pass as we arrived. The entrance gate and road which leads down to the cave and temple is 'typically Thai'. Straight, colourful, tastefully done and attractive, and the temple itself - a sight to behold - even from the entrance point.

As you head down the road toward the hill in which the cave resides, you just cannot take your eyes off the temple (Wat Tham Suwannakhuha), which is in part, built in to the hill. It is big, colourful and highly impressive, which makes up for the lack of actual cave that can be explored.

You can walk around the hill, finding a number of nooks and crannies which form cave entrances, but you will need to have a torch to be able to see anything inside. Good footware is recommended if you are going to do a little exploration, as you will be climbing on to boulders, fairly steep pathways and steps in places. There are some bats that have taken residence, which you will notice by the smell of ammonia at some of the entrances, but they are probably not present in large numbers as the smell is not at all overpowering, unlike big 'bat caves'. We did not stay late to see how many bats left the cave for their evening feed, but it may be worthwhile waiting for dusk to see what happens. Focus on the cave entrance just to the left of the Wat entrance, as this is where the smell of ammonia is strongest, and we did see one bat flying back in the cave entrance.

Nearby, there is another cave, which currently appears to be more a temple attraction than a cave exploration destination, called Mukkaleepon Cave. It is no more than 1 mile away, on the opposite side of the road, and can be found by the giant Buddha which is currently being built at the entrance.

How to get to Suwannakhuha Cave 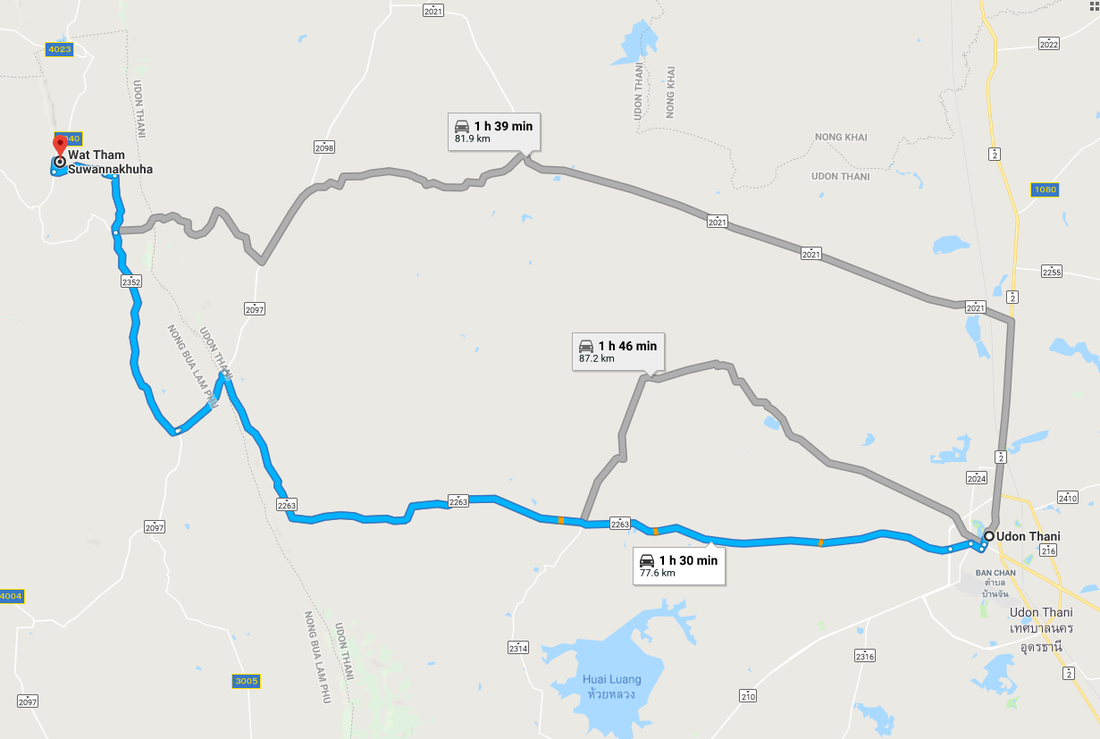