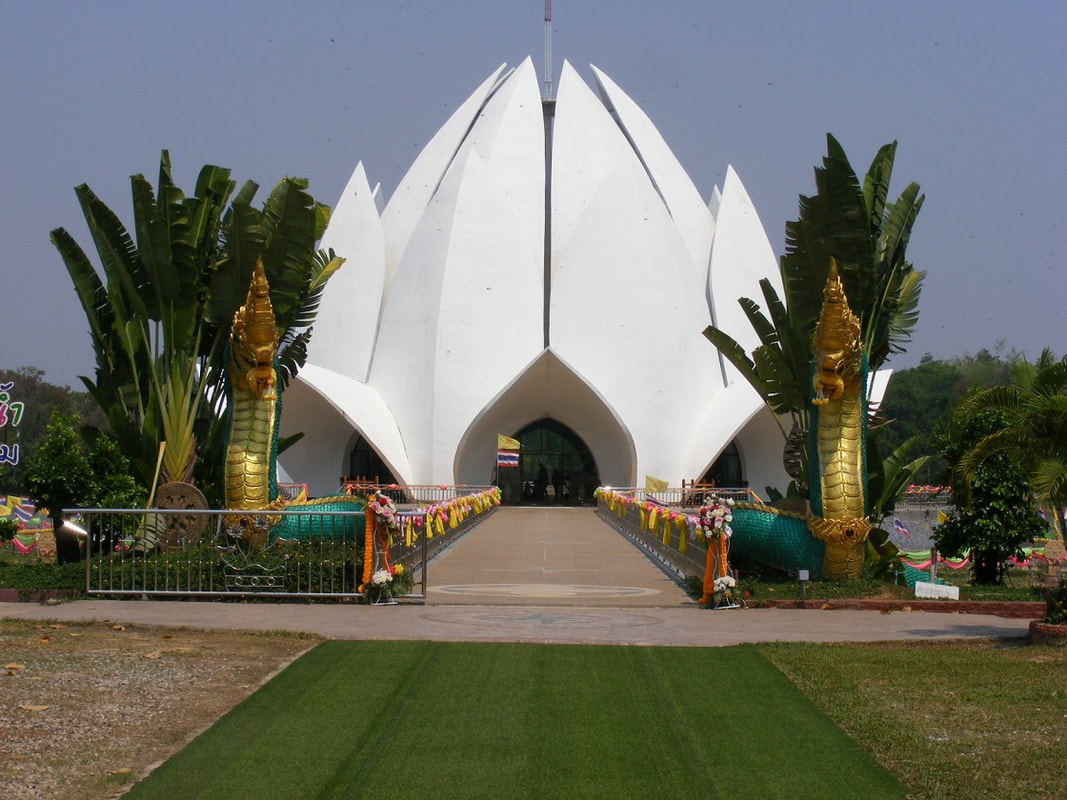 Phuttha Utthayan Wat Pa Dong Rai is a reasonably recent addition to the Udon Thani Province, and as far as I know is the only temple that appears as a Lotus flower in Thailand, making it a unique sight. When I say recent, I mean that the grounds have been developed over a 16 year period from 2003, however progress has been rather slow, and the temple was built many years ago, the Lotus Flower surround was only completed in early 2019.

The site is totally dependent on donations, and as the local population is quite sparse, money has not exactly been flowing in. The addition of the external lotus flower is not the end of the proposed development of this site and everywhere you look, there are signs of "work in progress".

While the temple is the main feature there is a fish feeding area adjacent to the car park, where they work on a "trust" system, leaving 2 small metal boxes for people to contribute their cash for the pellets. There is no set amount to pay, you pay what you want. There is a crocodile lake at the far end of the complex and an under-development pig pen next to it.
The temple is what the vast majority of people come to visit, though it does not appear to be as busy as many popular temples. Perhaps now the flower "shell" is complete more people will go to see it, and it is a very impressive sight. I am guessing it is some 20 m tall and has large double glass doors all around. Despite these large glass doors, the inside is not especially bright and I found that I needed to use a "flash" to take decent photographs.

The temple is also a little unusual as it is located in the middle of a large lake, with a bridge of about 50 m connecting it to the grounds.

The first thing you notice as you approach the "main" entrance are the paintings on the walls, each depicting Buddhist religious figures and revered animals. They are rather striking and very colourful.

To the left, as you enter is the focal point of the temple where the locals and visitors undertake their prayers and pay respect to Buddha. Directly in front of here is a gold-leaf lined hole in the ground (I did wonder how many people have fallen in to it, and how many more will in the future unless they make it impossible to do so). At the bottom of this hole, which is not much more than maybe 2 foot deep, is a collection of pottery. This is presumably related to the local Ban Chiang Museum and Archaeological centre.

There is a chance that you will be captivated enough from what you see in front of you, and while that is indeed rather grand, try to remember to look up at the dome ceiling.

Please remember to remove your shoes before entering. There are no other clothing restrictions in place at this time.
As you head back from the main temple, there is a crocodile lake on the opposite end of the complex and to the right. We only saw one "Croc" in the large lake and it was big, I mean seriously big. We only saw the head and based on that I would estimate it to be at least 4 m long. There was also a small block lined pen here housing a baby crocodile, the first time I have seen a baby "croc" in real life, and also the first time I have ever heard a crocodile make a noise as it was calling out. I am not sure if it was scared or just calling for mother. If it was the latter then it would be disappointed as there was no access to the pen it was living in.
There are toilets on site, about 50 m from the car park and I also noticed a drinks stall. I did not see any food for sale onsite but I guess it is only a matter of time before someone notices an upturn in visitor numbers and opens a restaurant.

How to get to Wat Pa Phu Khon

Phuttha Utthayan Wat Pa Dong Rai is a little east of the Ban Chiang Museum and  archaeological site, to the east of Udin Thani city.

From Udon Thani, take Route 22, Nittayo Road which runs south east from the city centre. Follow this road until you arrive at Ban Nong Mek, where you turn left at the traffic lights on to a rural road which takes you to Ban Chiang.

About 1 km from Ban Chiang you will start to see blue signposts for the temple.