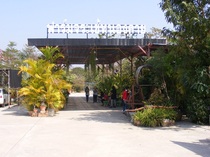 The Nong Khai Crocodile Farm is quite a new attraction, in relative terms. The 'farm' is open 7 days a week, from 8:00am to 5:00pm, costing 30 baht for children and 50 baht for adults (Thai and visitors).

On entering the park, it is hard to believe that there is actually anything here, other than perhaps some kind of gardens. But as you pass the 'tunnel', the grounds open up a little and you can see two low level concrete pens either side of the fountain that is dead ahead. If you bear left and follow the path, you will come the the 'show room', and if you bear right, and follow a longer path, you will come to quite a number of 'cages' where the Crocs live, as well as a load of Rabbits, a Lemur, four Indian Peacocks, and a number of 'game' birds'. They are nothing special to be honest, and of course Crocodiles being what they are, don't move a great deal. All the same, they are good viewing and still quite an awesome sight despite being behind secure pens.
Thai people are quite inventive when it comes to finding employment. Some will sell pineapple on the street from their motor bike, others will sell aluminium framed step-ladders from theirs. Then there are those who choose to torment crocodiles for a living! There are five shows every day: 12:00 (Midday), 1:00pm, 2:00pm, 3:00pm & 4:00pm. The building where the show takes place is pretty well put together, with a central concrete hard-standing where the guys do their 'tricks' surrounded by a shallow moat where the Crocodiles can enjoy the cooler water. The whole thing is finished off with a concrete wall and heavy-duty fencing, with seating all around.
The show begins with two young Thai men wisely asking for help and guidance from Buddha, asking that they are not savagely attacked or killed. They enter the arena armed with just a few bamboo sticks about one metre long, but they appear pretty confident in what they are doing. It all starts off quite tamely as most of the crocodiles seems to be docile, accepting a bit of prodding and gentle tapping with the bamboo sticks. Next, the guys decided to drag the Crocodiles by the tail, which I though was not so wise, but once again they didn't seem to care a great deal. It therefore came as a pleasant treat when one of the crocodiles started to show some attitude and reluctance to co-operate. Apparently this particular reptile was feeling a little sick, and thus a 'bit moody'. (Below right)
The 'tricks' performed included laying down on top of one of the larger crocs, placing a hand it to it's mouth, then a head. It should be noted that all these were done with the same large reptile, who showed no intention of doing anything other than laying there with it's mouth wide open, even when being dragged around by its tail.

Then we were entertained with some crocodile wrestling with another one of the 'beasts', and meanwhile, the moody croc was beginning to get a little aggressive with the other reptiles in the room. Then there was a repeat of placing various parts of the body in to the giants mouth, who was still none too bothered about it all. A bit like the snake handling at the King Cobra park in Khon Kaen, it is tame stuff, but it is not something you get to see every day so is worth the effort for that reason alone, and who knows, you might get lucky and see a nasty accident one day to liven up the proceedings!

How To Get To Nong Khai Crocodile Farm 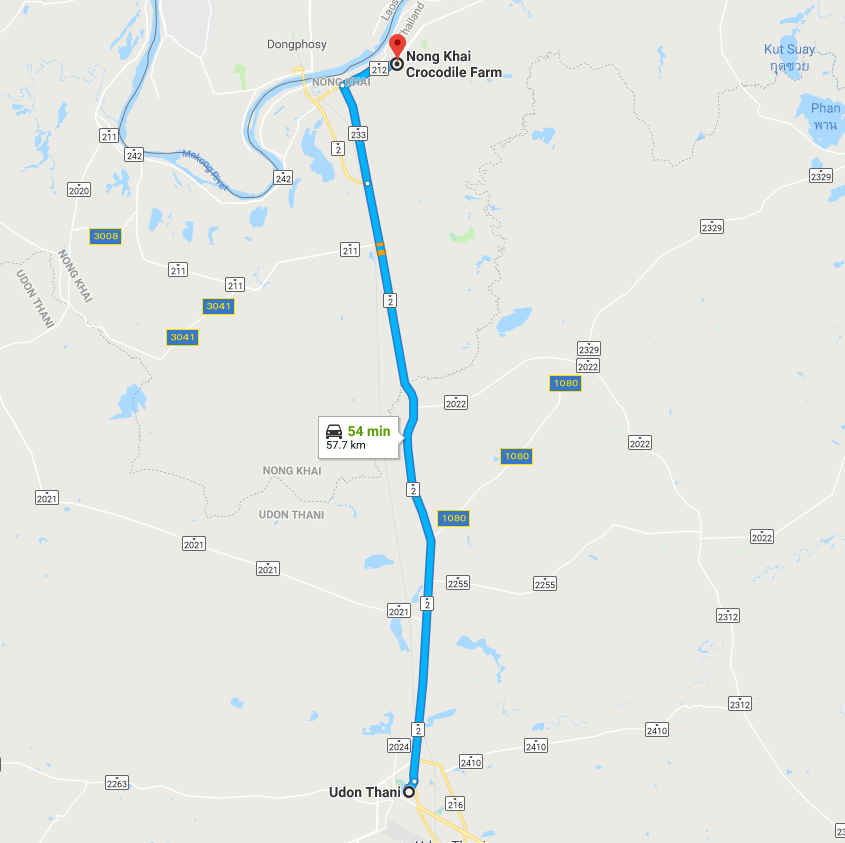 Nong Khai Crocodile Farm is located to the south of Route 212 to the south east of Nong Khai town. From Udon Thani, follow Highway 2, north to Nong Khai. On reaching the town, stay on Highway 2 for as far as you can go, and you eventually come to a crossroads, where you turn right on to A212. Follow this roads past the town until you see signs for Sala Kaew Ku. You will need to perform a u-turn where you double back on yourself for a few yards, then turn left towards Sala Kaew Ku and the Nong Khai Crocodile Farm is on the right.