Their role is essentially to assist, mediate, escort, and provide advice. They do not have powers of arrest or detention, or indeed powers of any nature, although they will strongly advise you to not do something if they believe it will land you in trouble or even possibly hand you over to the Royal Thai Police to 'take care' of you. Additionally, they offer a translation service in cases where you have been, or are going to be charged for a crime by the Royal Thai Police, so you can fully understand everything you need to know. Should your case go to court, the Tourist Police will escort you throughout the process, and effectively act as a chaperon during proceedings. They do not however, have any influence to assist your case at trial. If sentenced to prison, the Tourist Police will hand you over the Thai authorities and their role in the proceedings cease at that point. 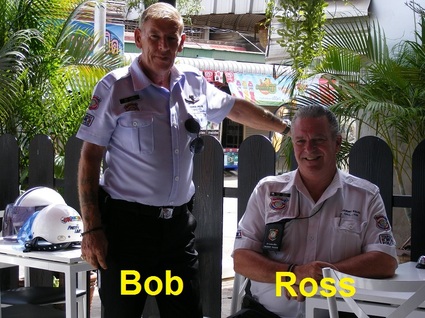 Udon Thani Tourist Police
During a period on incarceration in a Thai prison, the Tourist Police act as ‘go-between’, where you can send and receive messages to and from your immediate family members. Beyond this, they have no authority or influence.

Most individuals that form the Tourist Police are quite happy for you to stop them simply to ask directions to where you want to go. It’s all part of the service, and these people typically just enjoy engaging with the ex-pat community and visitors alike. The two guys we normally see on the streets here in Udon Thani, Bob and Ross (known locally as Bobby & Rossco), are more than willing to have a friendly chat but are also keen to highlight the importance of people who are experiencing difficulties, or believe they may do so in the near future, to approach them first, before any potential problem gets out of control. Most situations are dealt with easier before the event, than after. They walk the streets, mostly around the ferang nightlife and restaurant areas during the days, three days a week but are on call 7 days a week.

The Tourist Police only get involved in an incident where at least one, non-Thai citizen is involved, be it a fight, a traffic accident, theft, etc. These are also the best people to contact first should you lose your passport, wallet or other important documentation. They will not always be able to assist you directly, but they will know who can assist you directly if they cannot. In cases where both Thai’s and non-Thai’s are involved in an incident, the Tourist Police will discuss the issues with the Royal Thai Police on your behalf, but ultimately in most cases, what the Thai Police say, is pretty much final. This unfortunately is where the Tourist Police get a bit of poor press, mainly from visitors who get drunk and get in to an altercation with a Thai, be it over money, drink, or anything else. You have to remember that the Tourist Police have no real powers, in any given situation. They are there to mediate and hopefully resolve the situation, to the Thai Police satisfaction. I can only imagine the frustration they experience at times; when they see the Thai Police exploit the opportunity to get some ‘tea’ money from a drunken ferang.

The area the Udon Thani Tourist Police cover is approximately a 4km radius from Central Plaza, which takes in Udon Thani International Airport to the south, Nong Sim park and surrounding area in the east, Nong Prajak Park and beyond to the west, and Highway 2 heading to Nong Khai in the north.

If you see a visitor causing trouble anywhere in the city, call the Tourist Police on 1155, and inform them, then leave it in their hands. Do not get involved directly, as this could just end up in a load of trouble for yourself with the local Thai Police.

The Udon Thani Tourist Police offices can be found adjacent to Provincial Police Station and the Udon Thani prison on Naresuan Alley, which is off the Pho Si Road, which runs west from the Fountain Roundabout.